(Adapted from a piece that originally appeared in JazzTimes magazine, online and in the January 2022 print edition; read it there.)

Note: Chuck Owen & the Jazz Surge are playing three shows around Florida this spring, including including March 23 at Pilars in Winter Park; March 24 at 7:30 pm at the USF Concert Hall in Tampa, and March 25 at Eastern Florida State College in Cocoa. 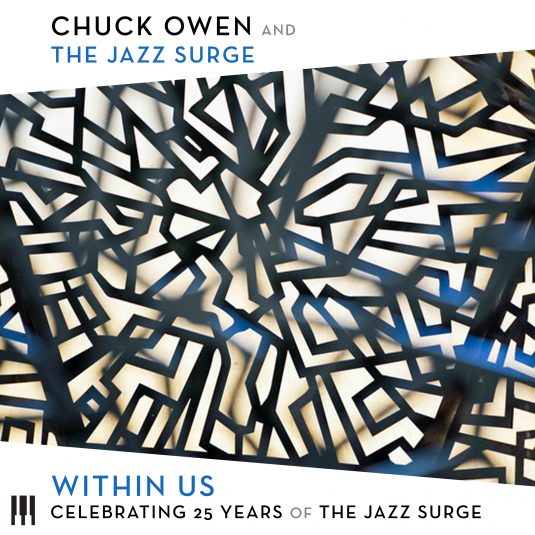 For Chuck Owen, Grammy-nominated arranger, composer, and leader of the acclaimed Florida-based Jazz Surge ensemble, there was no single magic moment when he was thunderstruck with a vision of how his career might unfold. But something of an “a-ha” did come Owen’s way during his time as a music-education student at the University of North Texas, then called North Texas State University. It arrived courtesy of fellow student Lyle Mays, who was writing for NTSU’s famed big bands and later gained fame and critical kudos as the pianist for the Pat Metheny Group.

“I had this huge background in Thad Jones/Mel Lewis, the Basie Band, Rob McConnell and the Boss Brass—very straight-ahead big bands,” Owen recounts from his home in Tampa, where he’s winding down a 40-year career at the University of South Florida (he designed, developed, and formerly ran its jazz studies program). “Lyle opened the door to how much more contemporarily and orchestrally focused the big band could be treated. That was eye-opening. I really wanted to frame the music I was writing for big bands in something that was more meaningful to me.”

Owen, also steeped in classical music thanks in part to his master’s in orchestral conducting from Cal State Northridge, is actively realizing that ambition. The just-released Within Us: Celebrating 25 Years of the Jazz Surge, the 19-piece group’s seventh album, is a set of compositions that are as personal, eclectic, and ambitious as anything that Owen has penned.

The music is partly reflective: The mournful, cinematic “American Noir” and “Apalachicola,” featuring Sarah Caswell’s soaring violin introduction and soloing, point to recent social, political, and environmental crises in the United States. But it’s also optimistic and forward-looking, as on the multi-textured “Within Us” and the pensive-to-urgent “Sparks Fly.” The latter track, lit up by Caswell, tenor saxophonist Jack Wilkins, and guest alto saxophonist Steve Wilson, toasts the Surge’s blue-chip Sunshine State musicians, many of whom have been part of the band since its start.

Americana textures—from folk music to Copland-style colors—have frequently come into play on the Surge’s albums, particularly 2013’s environmentally themed River Runs, a collaboration with a 33-piece orchestra, and 2017’s Whispers on the Wind. Those elements are also present on Within Us, which includes a new version of “The Better Claim,” from River Runs. “I have done that consciously,” Owen says. “I’ve tried to evoke Americana, and the struggles we’ve gone through in 2020, as a nation. That was the theme of Whispers on the Wind: What is America? How does what we say America is about show up in the American icons and in the way we act? I think there’s a huge disconnect.”

Those musical strains, particularly as expressed by Caswell’s violin and Corey Christiansen’s work on dobro and nylon-string, steel-string and 12-string guitars, help separate the Jazz Surge from the large-ensemble competition. Few big bands deploy two guitarists (Christiansen and LaRue Nickelson) and a violinist. Bringing violin into the Surge mix on River Runs was a game-changer, Owen says.

“I surprised myself by how much I enjoyed it, and by how many ways I found to use it that weren’t what I had associated with jazz violin in the past,” he says. “Sarah is so lyrical in her concept and really melds well with what I’m hearing. She can be extremely improvisational. So can Corey. I let both of them go a lot. That might be attractive to people who maybe don’t listen to big bands.”

Owen’s work may soon reach new audiences too, through a forthcoming untitled album with Germany’s celebrated WDR Big Band, slated for release in 2022. The collaboration—captured in two Cologne recording sessions separated by a long COVID-forced break—will include Owen’s arrangements of his tunes along with those penned by several WDR band members and Chick Corea’s “Arabian Nights.” Before his untimely death, fellow Tampa Bay area resident Corea had been slated to appear as a guest artist on Within Us’ version of his “Chelsea Shuffle.”

On September 26, the Surge reached a landmark with a gig at Birdland, the group’s first New York City performance in a decade. “It has taken a long time to come to fruition, and now it’s all hitting in rapid succession,” Owen says. “It’s all pretty wonderful stuff.”