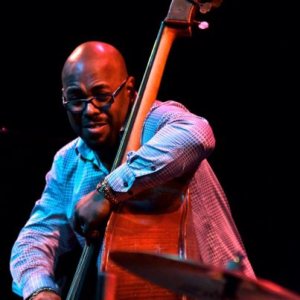 Christian McBride, easily the most recorded and most honored jazz bassist of his generation, brought his trio to the Mahaffey Theater in St. Petersburg  Saturday night for two impressive sets’ worth of standards and original compositions.

Much of the music was taken from McBride’s new CD, due early next year on the Mack Avenue label.  It wouldn’t be overstating things to say that the group, with McBride (Mahaffey photo by Bridge Burke) joined by monster young pianist Christian Sands and similarly talented drummer Ulysses Owens Jr. (photo by Bridge Burke), played the hell out of the material.

Unlike some of his recent ventures, McBride’s current trio is focused on the acoustic bebop, hard bop and swing side of jazz, with a nod to funk and R&B only coming only at the end of the show, courtesy of a version of Johnny Taylor’s “Who’s Making Love” that also referenced Michael Jackson’s “Gonna Be Starting Something” and Queen’s “Another One Bites the Dust.”

Sands, 23, throughout displayed astonishing chops that were sometimes reminiscent of the likes of Oscar Peterson, and he also showed a lighter, more genteel touch, in the vein of the late Billy Taylor, one of the New Haven, Conn. native’s early teachers. Owens demonstrated precise, intuitive playing, throwing unexpected accents and bomb drops into the mix, and sometimes switching to brushes.

McBride, of course, was the show’s star, turning in jaw-dropping runs, chords, slides and harmonic plucks, and offering beefy tone and walking grooves that were heavily influenced by Ray Brown and Ron Carter, while still distinctly his own.

Nice seeing McBride back in the Tampa Bay area so quickly, after bringing his “Kind of Brown” quintet to last year’s Clearwater Jazz Holiday; before that, he was last here with Pat Metheny‘s Trio, with drummer Antonio Sanchez, at the Tampa Theatre. McBride more than once told the audience how much he felt at home. So maybe he’ll make it an annual tradition?

(I’m writing a more detailed review of the fest for a jazz mag; I’ll link to it in this space when it’s published)

If the Mahaffey audience felt like a hometown crowd to McBride, maybe that owed in part to the number of locally based jazz musicians and jazz aficionados in attendance for what felt like a must-see on this year’s jazz calendar. We ran into pianists Kenny Drew, Jr. and Stan Hunter, drummers Ian Goodman, Mark Feinman and Steve Bucholtz (my old rhythm-section mate from the University of Florida jazz band), and bassist Alejandro Arenas, as well as Bob Seymour, the longtime jazz director for WUSF, 89.7 FM. Several musicians, and students, had a chance to attend a Q&A with McBride during sound check on Saturday afternoon.

That “just like home” feeling probably stemmed, too, from the fact that some McBride family members were in the audience, including a cousin, Faith Walston. McBride took a few minutes to give a shout-out to Walston’s recent book, “All Paws In: Lessons Learned From Loving My Rescue Dogs.”

Many of the above-mentioned locally based musicians are on the bill for the third annual Ybor Jazz Festival, which continues through Sunday at the HCC Performing Arts Building in Ybor City. Drew plays tonight, with Latin supergroup Guisando Caliente. Sunday, the trio Jazztek will be followed by Rayzilla’s Dreamboats. Admission is $15 daily. For more information, click here.

As mentioned on my Facebook page, I was REALLY looking forward to hearing Rickie Lee Jones, next Sunday (Nov. 11) at the Palladium Theater in St. Petersburg. Jones’ voice, jazz-pop songs and arrangements and great bands first impressed me back in the summer of ’79, when Chuck E.’s in Love” was part of the soundtrack of my teenage life (and background for an early romance). She had me at hello.

Unfortunately, the show was suddenly cancelled this week. I’ve not made any official inquiries as to why it’s no longer happening. On a whim, I contacted Rickie Lee through her Twitter account, and this is what she wrote in response: “Cancelled by promoter and manager. Come to the other date n florida.”